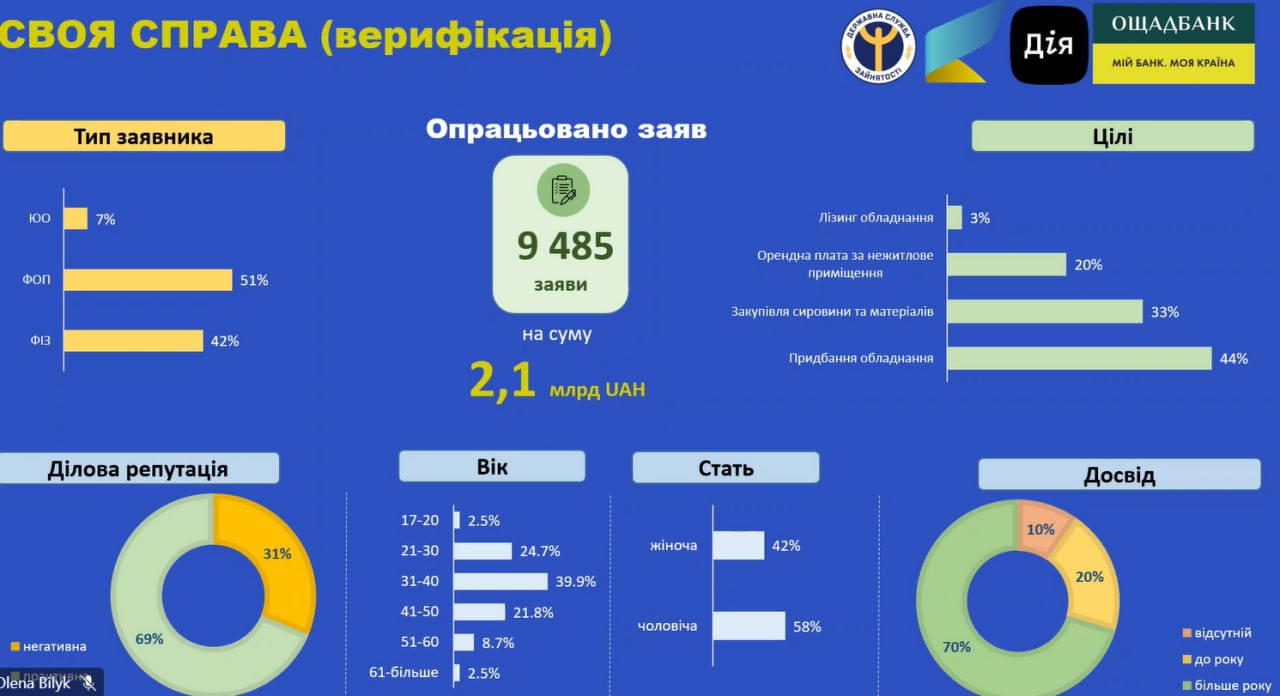 The event was held by USAID Economic Resilience Activity (ERA) in cooperation with the Reform team under the Ministry of Economy of Ukraine (MEU), and representatives of Oschadbank, the State Employment Center and businesses.

The event was attended by 90 representatives of small and medium-sized enterprises (SMEs), including relocated businesses that are now resuming work and are interested in attracting grants to create or scale up businesses.

About 11,000 Ukrainians submitted grant applications to start or restart businesses under the e-Robota state program, and 1,115 applications have already been supported by the government. The first grantees are already opening bank accounts; within six months, they should create jobs and hire people for 24 months.

“New grant applications are coming in from entrepreneurs every day on the Diia portal, and as of today, we have already received almost 11,000. All in all, the winners of different grant programs have requested more than 700 million hryvnias. The government has allocated 40 billion hryvnias for this project, so we urge businessmen and everyone who dreams of starting their own business to apply for state grant support. We strive to do our best to ensure every working Ukrainian has all the conditions to become a fighter on the economic front and thus bring our country closer to victory over the enemy,” said Tetiana Berezhna, Deputy Minister of Economy of Ukraine.

Currently, the government is waiting for the Verkhovna Rada to pass a draft law on reimbursing the single social contribution paid by those entrepreneurs who employ youth, veterans and other vulnerable categories.

To make it easier for business, the State Employment Center posted documents and tips on how to get a micro-grant on its website, as well as announcements of events where people can get help with filling out application forms and avoiding common mistakes – for example, specialists advise filling out an application in Diia on behalf of a legal entity, not an individual.

“Among the common mistakes is an incorrectly specified grant objective, when sometimes the applicant writes about one thing and applies for something else. There are certain restrictions on the use of grant money, for example, no more than 25% of the grant can be used for rental fees. But the main thing is that we receive interesting ideas and see people’s desire to develop businesses,” said Tamara Sokhatska, Deputy Director of the State Employment Center.

“It’s good that people are actively applying to start or resume businesses, because a strong economy is key to our success. We support only those applicants with a good business reputation. We see that there is gender equality among the applicants, and the average age is from 30 to 40 years old. We do not take experience into account, the main thing is desire. The most active regions that apply for grants are Vinnytsia, Poltava, Sumy, Kharkiv and Chernihiv Oblasts,” said Olena Hil, Deputy Director of the Department of Micro, Small and Medium-sized Business at JSC Oschadbank.

The most common reason for refusing applicants is court cases (criminal; the applicant is a defendant or party to the case), followed by negative credit history and invalid passports (expired unpasted photos; misspellings of surnames in the grant application and passport). The bank refuses to provide a grant to applicants with a negative business reputation. This reputation includes one or more components: invalid passport, seizure of property, and unpaid taxes.

During the event, participants asked how they could find out the reasons for refusals, and about the possibility of submitting grant applications from de-occupied territories. If applicants want to know the assessments of their grant applications, they should contact the hotline of the State Employment Center. The bank or employment center cannot disclose confidential information to a third party.

Speakers also advised entrepreneurs to use open registers, and try to make an entry for themselves. The same information will also be used by bank representatives when evaluating the application. Having a debt on loan payments for 180 days reduces assessment points of a business plan. Official registration as an individual entrepreneur is mandatory at the time of receiving the grant.

Iryna Fishchuk, an entrepreneur from Ivano-Frankivsk, shared her experience of
receiving a grant. She submitted an application three times, each time
correcting errors in it, before being successful.

Next month, USAID Economic Resilience Activity plans to hold another dialogue platform for entrepreneurs, inviting speakers who will be able to answer common business questions. In particular, entrepreneurs asked to discuss the issue of grants taxation.